This page has information on the “Daisy R” exhibit at the Canessa Gallery in San Francisco, opening Friday, February 6, 2015, This page is a work in progress. 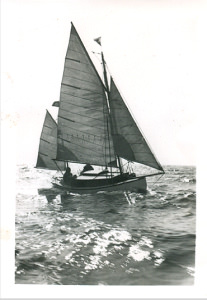 This is an early picture of the “Daisy R.” Possibly taken on one of the first trips just after WWII. There is a little bump of head, perhaps, in front of Thelma, on the lee side.  Could that be their youngest, Judy?  Or perhaps their collie “Keokie,” (named for “George” in Hawaiian!) 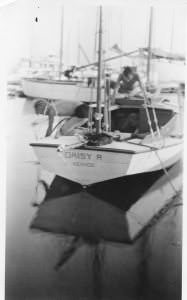 George and friends rigging “Daisy R” on launching day, in San Pedro, California, September 13, 1931. He was only 19 years old! 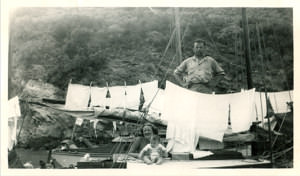 George’s caption: “On board “Daisy R” at Little Geiger Cove [Catalina Island] winter, 1939-40. Diapers belong to Judy (held by Thelma) — 1st of six! Our collie “Keokie” blends into the cliff.” 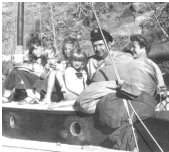 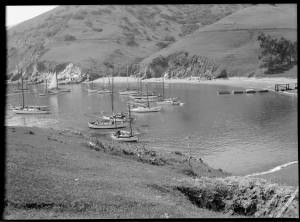 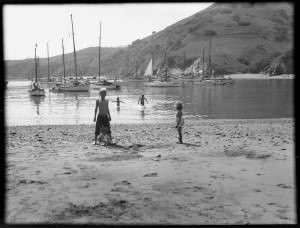 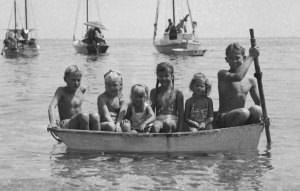 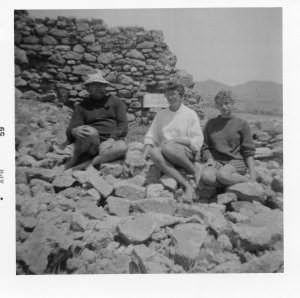 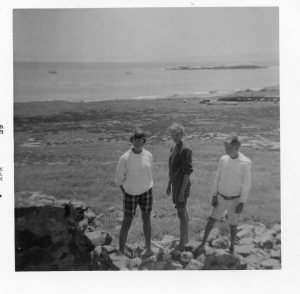 A fisherman’s stone hut at Forney’s Cove, Santa Cruz Island. The photo was taken in summer of 1958, of (l to r) George, Susan and Martha. Photo by Richard Geiger. The second picture was taken by George of Susan, Martha and Richard. The speck of ‘Daisy R’ can be spotted in the bay in the middle, with another boat anchored on the left.