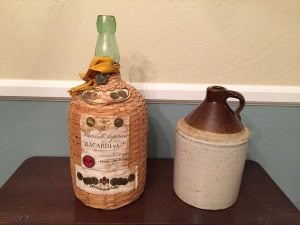 With a family of eight on an 18′ boat, fresh water is essential. On the “Daisy R,” the main supply of water was eight one-gallon Barcardi Rum bottles. These fit in various parts of the boat for future use. Between the two single bunks was a ceramic jug that was for daily drinking water. We all drank from the same jug. There was a chip in the lip that we still can recall on our lips from many decades ago. We used about a gallon and half water a day. We generally used saltwater for cleaning and bathing. 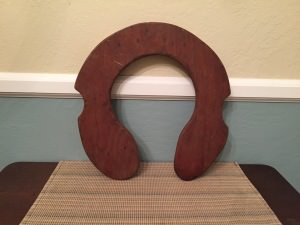 Under way on “Daisy R,” the only toilet we had was a galvanized steel bucket that was kept on the afterdeck. It was only used for this purpose. It could be set up on the small floor between the two single bunks in the cabin. A couple of cushions could be leaned against the companionway for a modicum of privacy, although your head stuck out through the main hatch. When done the bucket was always passed out to father George, who always dumped and washed the bucket out, and tied it to the jigger shrouds with marlin. Eventually he did construct a primitive toilet seat after many years of us sitting right on the cold metal rim … (bucket TK)